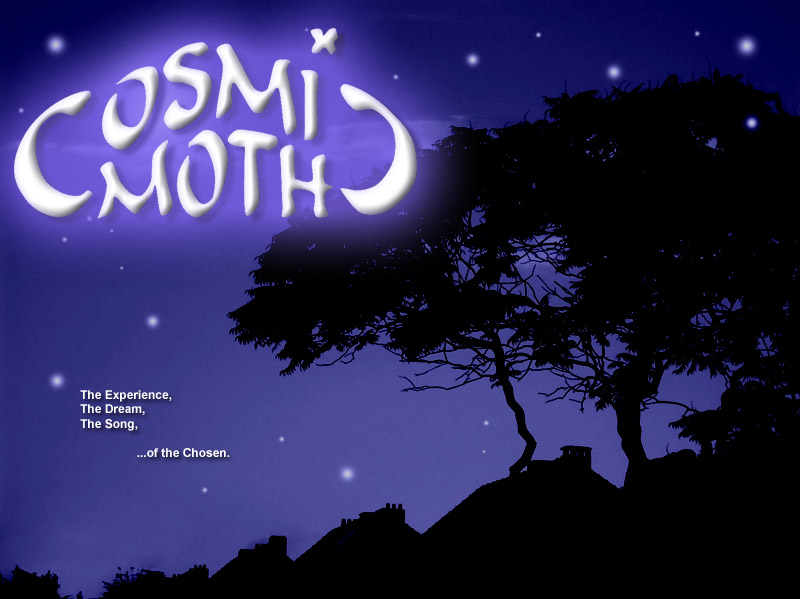 I created this site because one day I made an all out search for people who have had this experience. I searched everywhere on the internet but could find absolutely nothing! Many vague references where made to the mystical power of moths but I could find no concrete information on "the moth experience" or the moth song. The only story that supports my experience is written in Carlos Castaneda's Tales of Power. 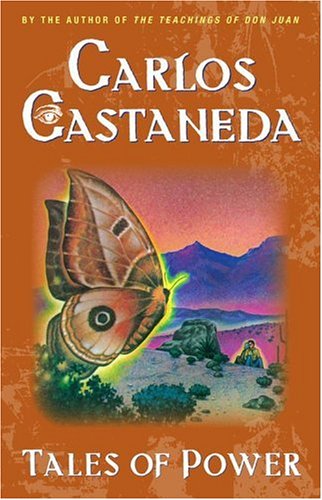 First some background... I had this experience while I was camping out in the forests of Michigan. I was not on drugs or hallucinogens or anything that may provoke an out of this world experience. At 17 years of age I was not yet involved in the mystical, new age, enlightenment, or any kind of practice that might also provoke this type of experience. I was just a young man alone in the woods trying to escape from my feelings. As I recall, it was all my girlfriend's fault.

I had made camp under a small grove of trees. I wasn't into making any campfires tonight. I just wanted to be alone with my thoughts and appreciate the sounds of the night. I decided to go for a walk on the various nature trails that ran through the forest. It was an hour into my walk when I started to hear strange sounds coming from the woods. As I was rising the hill, on the way back to camp, I began to hear footfalls from the deep woods next to me  following me. My first instinct was that an animal, a deer perhaps, was out for a nightly jaunt. As I kept walking the footfalls kept pace with me - but the thing that really threw me off was that rhythm. Not the steps of a four-leg creature but of two. I went over it a thousands ways  definitely a two step gait. I began to freak. What would another human be doing out here? At this time of night? In the deep woods? I ran. It came after me, completely abandoning its discreet behavior. The sounds coming from the woods were of a wild man running and crashing through the night.

I ran all the way back to camp. As I regained my senses I realized that whoever was out there was not a who but probably a what .

I found my camp and listened closely for sounds of pursuit. The night had quieted considerably, the crickets gone to sleep, but no sound of anyone, any thing , following me. I sat down in a defensive posture. A long time passed before I finally began to calm down. I seriously considered abandoning the quest and heading for my car. The whole incident had rattled me but I was also bewildered with curiosity. Could it be a ghost? A forest entity? My death? There was no way on this logical Earth that it could be animal or human. That left a great and imponderable mystery.

Hours passed and still nothing.

Then I heard it  soft, careful, steps approaching from the west. I immediately came too and with delicate grace assumed my defensive posture. Step, silence, step, silence. I didn't want to run and give away my position and I refused to let panic overwhelm me. If it was an animal it was sure being sneaky. The steps continued to get closer and I judged a distance of ten meters when they suddenly stopped. We were at a stand still and long minutes went by without a peep from either of us.

Then suddenly something hit me on the chest. I almost screamed. Looking down, a big fat moth had landed on my shirt. It fluttered for a second and then began walking up toward my neck. I put my hand in front of it and it climbed unto it and was still. What a specimen it was  almost the size of my hand and with beautiful markings, some which resembled haunting deep purple eyes. I carefully coxed it unto a leaf and we shared a few minutes as it slowly fluttered its wings up and down. 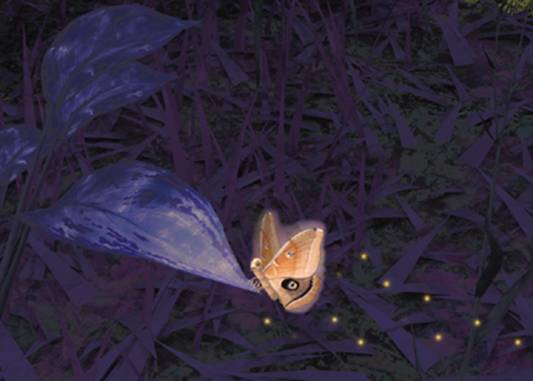 Pop, pop, pop. Something was happening to my head. It felt like a pressure inside me head was being released through a point between eyes. It felt like an orgasm in twelve dimensions. Pop, pop, pop. As I "dilated, I began to see pink and violet colors on the trees and plants. The moth was sprouting tiny particles of yellow light that floated and shot out of its wings. As I focused all my attention around that point between me eyes an explosion of sound and light burst from the air. It was like the sound of a loud song bird that emanated from a point of light that flew around me in large circles. The song sputtered and twittered and traveled from tree to tree. Sometimes it was a single series of notes and then it would become a swarm of little chirps. With each sputter the point between my eyes opened a little more and I could feel a steady stream of energy flowing through it. 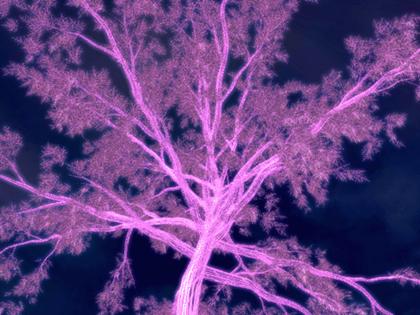 All around me I could see tentacles of violet and pink. I wasn't seeing just a tree  I was seeing its energy. It flowed from the ground, up the trunk, and out its branches in a dazzling array of packed ribbons. The smaller plants were the same. Tiny delicate strings of light etched inside every leaf and twig.

Suddenly everything quieted down. My moth flew away and I was left in complete bewilderment. The sounds of crickets had picked up again and the night was pregnant and oozing life. Now, I could hear the sound similar to a woodpecker from a nearby tree. Tap-tap-tap. Tap, tap, tap. 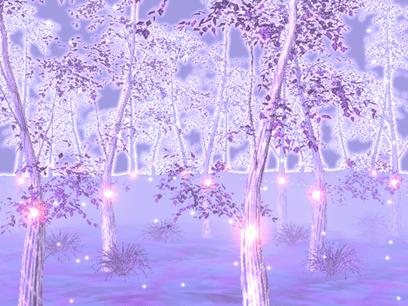 As every series of taps came I was being infused with outside energy. Its almost as if someone was raising the volume on an amplifier. With each tap I was flooded with a new wave of energy that began to seer my senses and my vision. The violet world disappeared and now everything was white and foggy blue. That world disappeared and another one appeared. I don't know how many layers I went through. Each seemed to have its own unique qualities but it wasn't so long before fear started to take hold and I began to analyze.

With my heavy thoughts came the trip back home. On the way down I passed the same worlds in exact order and finally the world started looking like normal. I was feeling vaguely fatigued and just wanted to lay down and close my eyes.

Then I saw one... On the plant in front of me was this... this... small globe of crazy koleidescope energy. It was a ball with a center point. All these particles and ribbons were dancing crazy around it. I was greatly curious so I gently picked it up. 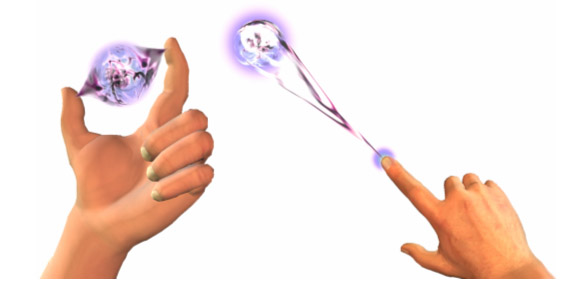 It was amazing to play with. They are made of the most silky material one can imagine. I played with it for a long time and found that I could manipulate it into taking different shapes. I was somehow able to control it with my own energies. I don't know what happened to it... one second I was playing with it and the next it melted right into my hand. I could feel it inside my hand and I got really paranoid because I wanted it out. It gave me a really tingly very pleasureable sensation. The feeling eventually went away but I really wonder what happened to that thing!

So much had happened but somehow I couldn't string two thoughts together. Almost automatically I put one foot in front of the other and took the shortcut down the hill towards my car..

Driving home in the predawn wasn't as difficult as I thought. My fatigue had come on suddenly  right after my wild experience. I was feeling my weight again although my limbs felt a bit stringy. I had definitely stretched my energies to their limits and I was coming down for a welcomed crash landing.

I turned into my driveway, parked the car, then headed around the back to the basement door. I was the only one who lived down there so this made it quite convenient. Before going in, I decided to sit down on the dewy grass and regenerate.

I was home and safe again. What an amazing adventure. I would need much time to think about all of this.

Crunch-crunch, crunch-crunch. Heavy footsteps were approaching the edge of my yard. That is when I saw it. From behind two large trees stepped the shadow. It was completely black like space and it seared me like the devil's eye. I got a huge cramp below my stomach and then I heard something crack. The lower limb of the tree had split in two. It all happened so suddenly. And just as suddenly it was over. The shadow turned around and headed back to the forest. I opened the door and went into my house. 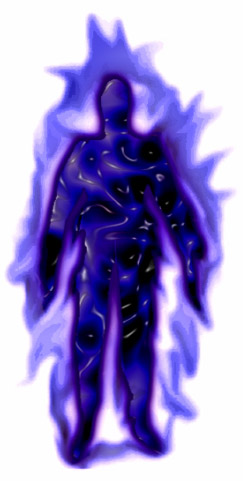 I've had years to think about all of this... I eventually picked up Carlos Castaneda's books and started reading about Toltec sorcery. When I came to his Tales of Power I was flabbergasted. Although my moth experience was a little different I finally had some clues as to what the heck had happened to me! Castaneda describes the moth as the "Guardian of Eternity" and "a Herald of Knowledge". I now think that the moth and the allies (the smokies) are somehow connected and I no doubt think that what I saw and heard walking around the forest was indeed an ally. I've had numerous experiences since but nothing like that first time.

If you would like to order a copy of my book please click the link or picture below.